Headphones.com – The “Best in Show” Award….

Andrew Park, reviewer at Headphones.com spent time with the team from Warwick Acoustics in their SoundCabin Room at the Munich HighEnd show 2022 listening to both the flagship APERIO and recently launched BRAVURA Headphone Systems, and here is his reaction;

“The best experience with headphones I had at the show came from the Warwick Acoustics APERIO, their crazy high end electrostatic system. But interestingly, the less expensive BRAVURA is the one that had the more versatile and balanced tonality. Let me explain.

If anyone remembers the Sonoma Model One electrostatic headphone system from some time ago, the APERIO and BRAVURA are the newer designs from the same folks who made that one. And while the Model One was well-regarded for both its tuning and its subjective qualities, Warwick acoustics have seemingly improved things on all fronts. 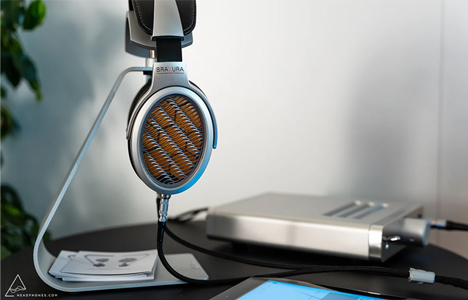 Both headphones had a general tonality that was balanced to some degree of ‘neutral’, which involves well-extended bass, a decent amount of ‘ear gain’ upper midrange presence as well as smooth, extended treble. So they’re more on the normal rather than esoteric side of things for the tuning.

The APERIO was extremely well-suited to my favorite jazz and acoustic recordings, and that’s what I kept listening to in their room. I think it’s maybe just a tad much ear gain for a wider range of music, but I also found that I didn’t care. This thing was so detailed, so separated and controlled, so well defined for the images coming through that I got that “wow” feeling I remember from first trying high end headphones – just… now that I’m normalized to high end headphones, apply the same idea to the crazy high end. It was the system that I kept telling everyone they had to listen to. 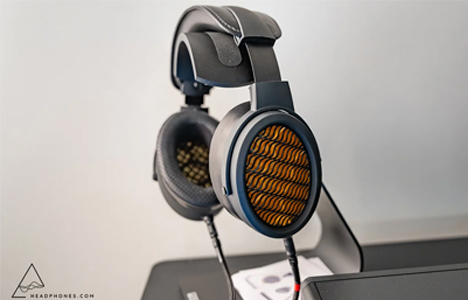 With that in mind, the more modestly priced BRAVURA (I say that… but this is a whole system that’s still very high end) is the one that DMS liked more, as did a number of my other reviewer friends who heard both systems, and I think that’s because it was dialled back just a touch on both the technical detail front, and slightly more relaxed for its tonal balance overall. This made it a bit more forgiving for a wider range of recordings, so I could see why everyone else was also talking about the BRAVURA.

These are headphones I now have to get into the lab to test and give a thorough review to – but if I had to give a “best of show” award to anything headphone related, it would be these two systems. I went back to the Warwick Acoustics booth at least three times over the course of the event due to how much these two systems stood out. Not only are they both well-tuned, they also have technical qualities that rival the very best available.”

Thanks to both Andrew and Douglas for passing by and sharing these great comments!

This website uses cookies to improve your experience while you navigate through the website. Out of these cookies, the cookies that are categorized as necessary are stored on your browser as they are essential for the working of basic functionalities of the website. We also use third-party cookies that help us analyze and understand how you use this website. These cookies will be stored in your browser only with your consent. You also have the option to opt-out of these cookies. But opting out of some of these cookies may have an effect on your browsing experience.
Necessary Always Enabled
Necessary cookies are absolutely essential for the website to function properly. This category only includes cookies that ensures basic functionalities and security features of the website. These cookies do not store any personal information.
Non-necessary
Any cookies that may not be particularly necessary for the website to function and is used specifically to collect user personal data via analytics, ads, other embedded contents are termed as non-necessary cookies. It is mandatory to procure user consent prior to running these cookies on your website.
SAVE & ACCEPT